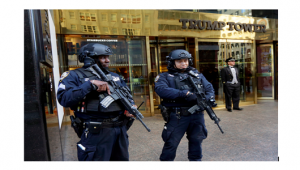 President-elect Donald Trump’s presence in New York City is having a crippling effect on some of the biggest retail stores in the country.

Since the election, the area surrounding Trump Tower on 5th Avenue and East 56th Street, where Trump maintains a residence, has become overrun with security personnel and protestors.

At times, entire sections of 5th Avenue — the most prominent shopping corridor in the country — have been shut down to keep the president-elect safe.

This poses a huge problem for retailers like Tiffany & Co., Abercrombie & Fitch, Hollister, Henri Bendel, and Polo Ralph Lauren, which have some of their most highly trafficked stores in the world within close proximity to the Trump Tower.

Retailers depend heavily on sales at their flagship 5th Avenue stores, which draw vast amounts of shoppers and tourists each year.

Now the Trump-related street closures and congestion could weigh down on traffic at those stores for at least the next four years, according to RBC Capital Markets analyst Brian Tunick.

“With consistent protests outside our president-elect’s residence, traffic, security, and congestion near Fifth Avenue and 56th Street has reached a fever pitch,” Tunick wrote in a recent note to clients. “We’d highlight subsequent traffic risk at the nearby Tiffany & Co. New York flagship (~25% of 4Q sales) as well as Abercrombie & Fitch and Hollister flagships. To the extent that the president-elect opts to split his time between New York and Washington, DC during the next four years, this could pose an ongoing traffic disruption.”

Trump’s advisors have said that the president-elect plans to split his time between the White House in Washington during the week and his other residences on the weekend, including Trump Tower. 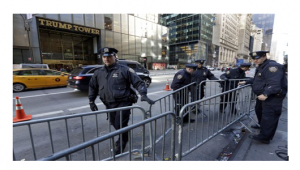 A Tiffany & Co. store employee told Business Insider over the phone on Wednesday that the store’s main entrance on 5th Avenue has been closed since the election as a result of security and protests, and customers must now enter through the 57th street entrance. She said she doesn’t know when or if the 5th Avenue entrance will reopen.

“Tiffany is in frequent communication with the New York Police Department and US Secret Service regarding safety and security along the perimeter of our Fifth Avenue flagship,” the company said. “We remain open for business with regular hours and welcome customers to ent 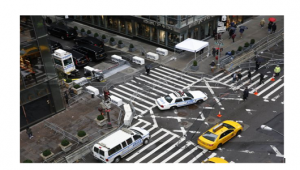 er the store via our 57th Street entrance while any barricades along Fifth Avenue are in place.”