Buhari asked lawmakers on Tuesday to approve the 2018 budget with a deficit of 2 trillion naira ($5.6 billion), compared to this year’s estimated fiscal gap of 2.356 trillion naira. Non-oil revenue is projected to triple to 4.2 trillion naira and will include funds raised from “restructuring of government’s equity in joint ventures,” he said in his budget speech in the capital, Abuja, without providing more details. 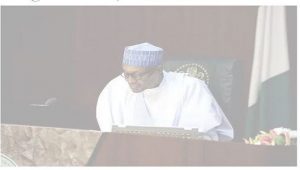 Lawmakers are required to approve the budget before spending can start. In the last two years delays of as much as six months in signing the budget into law held back spending on projects and weighed on economic growth. Africa’s biggest oil producer is rebounding after the economy contracted by 1.6 percent in 2016, the first such performance since 1991.

“The late passage of the 2017 budget has significantly constrained budget implementation,” Buhari said. He urged the National Assembly to approve the spending plans by Jan. 1 “in our efforts to return to a more predictable budget cycle that runs from January to December.”

The International Monetary Fund forecast Nigeria’s economy will expand by 0.8 percent this year as production of oil increases and foreign-currency availability improves for manufacturers to import inputs.

“The budget deficit will probably be higher than forecast because non-oil revenue may not be as high as projected,” John Ashbourne, an economist at Capital Economics Ltd. in London, said by phone. “We expect a budget deficit of 2.5 percent of gross domestic product compared to the forecast 1.77 percent.”

The deficit will be funded by 1.7 trillion naira of borrowing, half of which will be external, and the privatization of non-oil assets to the value of 306 billion naira, Buhari said. A Budget Ministry document showed in February the government plans to generate money through asset sales in the next five years.

The government plans to reduce debt-servicing costs by almost doubling the portion of cheaper foreign borrowing to 40 percent of total liabilities. This strategy will free up more funds for development and started with an announcement in August that the government will issue dollar bonds to replace $3 billion of maturing domestic treasury bills.

“If the government will borrow externally as it has indicated, the budget has to be passed early so it can meet up with the funding gap,” Michael Famoroti, an economist at Lagos-based Vetiva Capital Management, said by phone. “There is the challenge of getting approval from the legislature and it’s something it can’t overlook.”

The 2018 budget of 8.6 trillion naira is 16 percent bigger than this year’s and is based on projected oil output, including condensates, of 2.3 million barrels a day at $45 per barrel and using an exchange rate of 305 naira per dollar, Buhari said.

Oil output is recovering in the Niger delta after it dropped to almost three-decade lows last year as militants destroyed pipelines. Buhari told lawmakers that the country can’t return to the crisis, amid threats from some groups who said would resume attacks because the government hasn’t met promises they made when they agreed to cease fire earlier this year.

The government forecast economic growth of 3.5 percent in 2018, according to Buhari’s presentation. Inflation, seen at 12.4 percent for next year, may allow room for the central bank to ease monetary policy. It left the benchmark interest rate at a record high of 14 percent since July 2016.

(An earlier version of this story was corrected to fix the government’s inflation forecast in the last paragraph.)