A competent security source told the News Agency of Nigeria (NAN) that the insurgents attacked a military formation at Magumeri, about 32 km from Maiduguri the state capital.

The source said that the insurgents attacked the area at about 6 p.m. and shot sporadically in an attempt to infiltrate the town.

The source revealled that the troops and other security personnel engaged the insurgents and successfully repelled the attack.

“The insurgents could not infiltrate the town and they were forced to flee after hours of gun battle.

“No one can ascertain the level of casualties at this time,” he said.

However, Kaka Audu, a member of the Civilian Joint Task Force (CJTF) in the area, said that the insurgents attacked the town from the military check point and Bengel area of the town.

Audu disclosed that some of the insurgents that attacked from the Bengel axis managed to enter the town and torched some buildings before they were finally pushed back.

“We came back from a joint patrol with the military around 6 p.m. because intelligence report showed that the insurgents were gathering at the outskirt of the town.

“Few minutes later, the insurgents attacked with full force from two directions. There was reinforcement from the military and the attack was repelled.”

Audu noted that powerful echoes of gun shots and explosive devices prompted residents to flee to nearby forest.

The local militia added that most of the residents, who had earlier run to the bush, returned to their homes later.

The military authorities are yet to comment on the incident.

Boko Haram insurgents had in July attacked an oil prospecting team on exploration exercise in the area.

The insurgents killed several members of the team and abducted five staff of University of Maiduguri. 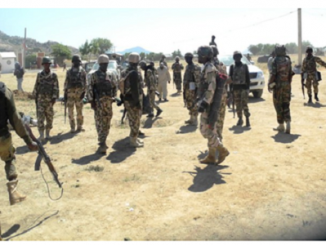